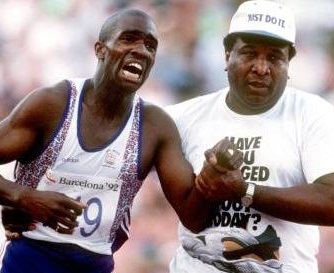 At the Olympics in Barcelona in 1992, Derek Redmond was prepared for the 400 meter semifinal race.  He felt he was in the best shape of his life. He posted the fastest time of the first round, and went on to win his quarter-final.

In the 400m semi-final, Redmond started well, but in the back straight about 250 meters from the finish, tragedy struck.  Coming around the bend in the track, Derek’s hamstring snapped.  He hobbled to a halt, and then fell to the ground in pain.  Initially he thought he had been shot because the pain was so great. His leg would not function.  Stretcher bearers made their way over to him, but Redmond decided he wanted to finish the race. He began to hobble along the track.  London’s The Guardian newspaper quoted him, “Everything I had worked for was finished. I hated everybody. I hated the world. I hated hamstrings. I hated it all. I felt so bitter that I was injured again. I told myself I had to finish. I kept hopping round. Then, with 100 meters to go, I felt a hand on my shoulder. It was my old man.”

Derek hopped on one leg for half a lap before his father came out of the stands to his aid. Jim Redmond barged past security and on to the track to get to his son. Together they finished the race with Derek leaning on his father’s shoulder for support.  As they crossed the finish line, the crowd rose to give Derek a standing ovation.  “I saw my [son] having a problem and it was my duty to help,” Jim Redmond said. “I actually went on the track to try to stop him inflicting further damage to himself.  It was Derek’s idea.  He asked me to get him back in that lane and I offered him a shoulder to lean on.”