Earlier in the day, the mother of Milwaukee Madison senior captain Johntel Franklin died at the hospital.  Franklin’s mother, who was suffering from cancer, had taken a sudden turn that Saturday afternoon.  Franklin and several of his teammates were at the hospital late that afternoon when the decision was made to turn off the life-support system.  Carlitha Franklin was just 39 years old when she died.

Coach Womack was going to cancel the game, but Franklin told him he wanted the team to play. They did play despite the late start.

Early in the second quarter, Womack saw someone out of the corner of his eye.  It was Franklin, who came there directly from the hospital.  The game was well under way when Franklin arrived at the gym that night.  “When he came with that uniform on, there was like a hush over the crowd,” Womack said. “I almost had to call a time-out to wipe some tears away.”

The Knights called a time out, and the players went over and hugged their grieving teammate.  Fans came out of the stands to do the same.

Franklin wanted to play, but since he arrived at the gym in the second quarter, Franklin’s name was not in the official scorebook.  Coach Womack assumed Franklin wouldn’t make it to the game, never the less play, so he hadn’t put him on the active roster.

Rules dictated that by adding Franklin to the roster in the second quarter would mean an automatic technical foul for the Knights, giving DeKalb two uncontested free throws. Though it was a tight game, coach Womack was willing to give up the two points.  It was more important to help his player deal with his grief by playing.

The DeKalb ‘s Barbs coach, Dave Rohlman, and his players knew of the situation, and told the head official not to bother with the foul, given the circumstances.  “I expressed to him that we should not be shooting the technical that we did not want one,” DeKalb’s coach David Rohlman said.  However, the referees insisted that it was the rule extenuating circumstances or not.  A technical foul was assessed to the Milwaukee Madison Knights.

Rohlman and McNeal discussed strategy.  Then McNeal, stepped to the foul line, dribbled the ball a couple of times, and flipped the ball a few feet and it rolled toward the end line. The second barely left his hand.

It didn’t take long for the Milwaukee players to figure out what was happening. They stood and turned toward the DeKalb bench and started applauding the gesture of sportsmanship.  Soon, so did everybody in the stands.  “They started applauding us. And so did the Madison fans at the same time,” said Rohlman. “At that point I knew that we had done the right thing.”

“I did it for the guy who lost his mom,” McNeal told the Milwaukee Journal Sentinel. “It was the right thing to do.”

Milwaukee Madison went on to win the game 62-47.  Afterward, both teams went out for pizza, two players from each team sharing each pizza.  DeKalb would go home with a loss, but it would be a trip they’ll never forget.  “This is something our kids will hold for a lifetime,” Rohlman said. “They may not remember our record 20 years from now, but they’ll remember what happened in that gym that night.”

After the game, overwhelmed by DeKalb’s gesture, the Knights’ coach wrote a letter to DeKalb’s hometown paper, The Daily Chronicle, expressing how moved he was by the gesture. “I was overwhelmed with this display of almost unheard of sportsmanship and class,” Womack wrote. “As a principal, school, school staff and community, you should all feel immense pride for the remarkable job that the coaching staff is doing in not only coaching these young men but teaching them how to be leaders.” 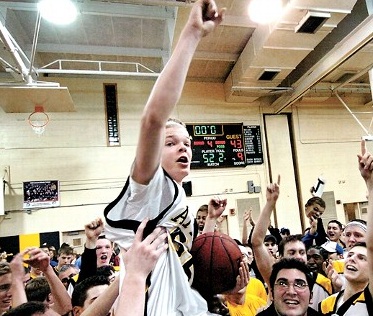 Jason McElwain, a high-functioning autistic had a passion for basketball, so Greece Athena High School basketball coach Jim Johnson appointed him manager of the team.

On February 15, 2006, Greece Athena was playing Spencerport High School for a division title.  As a reward for his dedication, coach Johnson decided to add McElwain to the roster and have him suit up and sit on the bench for the game.  With 4 minutes left, Greece Athena had a large lead, so Johnson decided to let McElwain play.  When the young man with a disability that slows down most people was sent onto the court, the packed gymnasium erupted with joy.  After initially missing two shots, McElwain made an amazing six three-pointers and one two-pointer in just four minutes – including the last shot of the game.  As soon as the final buzzer rang, fans from the stands stormed the court in celebration.

Allan Guei, an 18 year old star basketball player at Compton High School in the Los Angeles won $40,000 in college expenses in a free-throw contest.  In the weeks following the competition, Guei won a full basketball scholarship to Cal State Northridge.  NCAA rules would have permitted him to keep nearly all his prize money, but he instead decided to distribute his winnings among the seven runners-up so that they too could attend college.