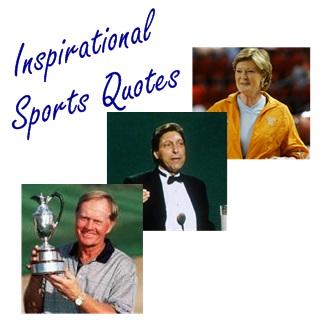 Below is our collection of inspiring quotes directed at athletes, coaches, and others who are looking for inspiration, motivation, or encouragement. They are about achieving goals, building teams, finding passion, revealing character, and finding the true lessons of sports. Take a few moments to read some and reflect on how it may apply to you or your team.

“whether we win or lose, we have applied the best of ourselves to the task at hand.” – Vince Lombardi

“The measure of who we are is what we do with what we have.” – Vince Lombardi

“Keep away from people who try to belittle your ambitions. Small people always do that, but the really great make you feel that you, too, can become great.” Mark Twain

“No pessimist ever discovered the secret of the stars, or sailed to an uncharted land, or opened a new doorway for the human spirit.” – Helen Keller

“The cynic knows the price of everything and the value of nothing.” – Oscar Wilde

“Our character is what we do when we think no one is looking.” H. Jackson Brown, Jr.

“It’s not so important who starts the game, but who finishes it.” – John Wooden

“Although I wanted my players to work to win, I tried to convince them they had always won when they had done their best.” – John Wooden

“The true test of character is not how much we know how to do, but how we behave when we don’t know what to do.” – John Holt

“Determine that the thing can and shall be done, and then we shall find a way.” – Abraham Lincoln

“Our goals can only be reached through a vehicle of a plan, in which we must fervently believe, and upon which we must vigorously act. There is no other route to success.” – Stephen A. Brennan

“Success is peace of mind which is a direct result of self-satisfaction in knowing you did your best to become the best you are capable of becoming.”

“You can’t live a perfect day without doing something for someone who will never be able to repay you.” – John Wooden

“Obstacles are those frightful things you see when you take your eyes off your goal.” – Henry Ford

“Leadership is an action, not a position.” – Donald H. McGannon

“A great leader never sets himself above his followers except in carrying responsibilities.” – Jules Ormont

“Good leaders make people feel that they’re at the very heart of things, not at the periphery. – Warren Bennis

“Leadership is the art of getting someone else to do something you want done because he wants to do it.” – Dwight D. Eisenhower

“The great leaders are like the best conductors – they reach beyond the notes to reach the magic in the players.” – Blaine Lee

“Character cannot be developed in ease and quiet. Only through experience of trial and suffering can the soul be strengthened, ambition inspired, and success achieved.” – Helen Keller

“The ultimate leader is one who is willing to develop people to the point that they eventually surpass him or her in knowledge and ability.” – Fred A. Manske, Jr.

“Success requires the vision to see, the faith to believe, and the courage to do.” – Author Unknown

“The majority of men meet with failure because of their lack of persistence in creating new plans to take the place of those which fail.” – Napoleon Hill

“Sports do not build character, they reveal it.” – John Wooden

“An athlete is a normal person with the gift of an undying passion to be the best and achieve greatness.” —Amanda Ring

“Courage is not the absence of fear. It is being afraid but being able to control that fear so you are able to perform at your highest ability. That’s what makes a champion.” —Cory Lester

“The glory of sport is witnessing a well-coached team perform as a single unit, striving for a common goal and ultimately bringing distinction to the jersey the players represent.” —Dick Vitale

“Every team requires unity. A team has to move as one unit, one force, with each person understanding and assisting the roles of his teammates. If the team doesn’t do this, whatever the reason, it goes down in defeat. You win or lose as a team, as a family.” —Jack Kemp

“When you step on that field knowing that everything you worked for comes down to one game, you get that realization: this is what it’s all about, and this is why the game was made.” —Unknown

“The difference between a good athlete and a top athlete is the top athlete will do the mundane things when nobody’s looking.” —Susan True

“Individual glory is insignificant when compared to achieving victory as a team.” —Dot Richardson

“Far away there in the sunshine are my highest aspirations. I may not reach them, but I can look up and see their beauty, believe in them, and try to follow where they lead.” -Louisa May Alcott

“If you laugh, you think, and you cry, that’s a full day. That’s a heck of a day. You do that seven days a week, you’re going to have something special.” – Jimmy V

“Being the best that you can be is possible only if your desire to be a champion is greater than your fear of failure.” —Sammy Lee